On December 3rd, Junior Party the Broad Institute, Harvard University, and MIT (collectively, Broad) filed its Contingent Preliminary Motion No. 3 in Interference No. 106,133 (which names Sigma-Aldrich as Senior Party), asking the Patent Trial and Appeal Board to designate certain claims declaring in the Declaration as corresponding to the Interference Count as not having such correspondence, under 37 CFR §§ 41.121(a)(1) )(i) and 41.207(b)(2). Senior Party Sigma-Aldrich filed its Opposition on March 16th.

As argued by Broad, these claims fell into five discrete categories:

Category A: Staphylococcus aureus Cas9 protein (“SaCas9”);
Category B: Cas9 chimeric CRISPR enzyme;
Category C: Cas9 with two or more nuclear localization signals (“NLSs”);
Category D: Cas9 fused to specified protein domains; and
Category E: Claims that are generic as to RNA and also do not specify integration of a donor polynucleotide sequence (“Donor Template Integration” claims), i.e., the only claims that should remain designated as corresponding to Count 1 are those that are either (i) limited to single molecule RNA (“sgRNA”), or (ii) require Donor Template Integration and are not otherwise separately patentable.

Broad made as a basis for its motion the distinction that the Broad portion of “McKelvey” Count 1 is directed to CRISPR-mediated cleavage in a eukaryotic cell (that “cover”[s] many different inventions that are separately patentable from Count 1”) while Sigma-Aldrich’s portion of the Count recites CRISPR-mediated cleavage coupled with integration of a heterologous DNA molecule, termed “Donor Template Integration.” The briefed that Broad’s claims “that are both generic as to RNA [CRISPR components, i.e., single- or dual-molecule embodiments] and not limited to Donor Template Integration” should be de-designated as not to Count 1 of the ‘133 Interference as declared (in addition to the categories of claims set forth above).”The only claims that should correspond to Count 1 are those that either are limited to use of sgRNA (and so correspond to the Broad half of Count 1) or recite Donor Template Integration (and so to the Sigma half of Count 1),” Broad argued.

Specifically, the claims in each category Broad argued should be de-designated as not corresponding to the Count were:

In its Opposition, Sigma-Aldrich argues that Broad failed to carry its burden to de-designate claims, inter alia, for failing to apply the “one-way obviousness” test or address the effect of prior art, including the Jinek 2012 paper, on obviousness of these claims. While, Sigma-Aldrich asserts that it “endeavored to review 461 of Broad’s involved claims in all 16 of Broad’s involved patents and applications” and, consistent with positions Senior Party has taken in Interference No 106,132 against CVC deign not to contest de-designation of the following claim types:

In addition, Sigma-Aldrich does not contest Broad’s motion to de-designate claims directed to “(a) SaCas9; (b) a chimeric Cas9; (c) two or more NLSs; and (d) a Cas9 protein fused to one or more protein domains.”

Turning to those claims Sigma-Aldrich does contest de-designation, the brief set forth a table: 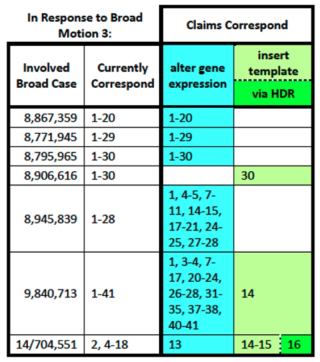 which represents pictorially Sigma-Aldrich’s parsing out the various CRISPR embodiments to which these claims are directed. According to Sigma-Aldrich’s Opposition, Broad fails to show whether claims directed to a generic guide RNA would have been obvious in view of the Count (setting forth extensive arguments regarding the capacity of the prior art in the December 2012 timeframe to have done so) . Sigma-Aldrich also notes inconsistencies between Broad’s argument in Motion No. 3 with its arguments in its Motion No. 2, directed to adding claims 52-54 of the ‘403 application to the interference, where these claims, that recite different guide RNA species (generic guide RNA, claim 52; dgRNA, claim 53; and sgRNA, claim 54) should (according to to Broad’s prior motion) all be designated as corresponding to the Count.

Sigma-Aldrich also contends that claims reciting merely “guide RNA” should be construed (as this term was in Interference No. 106,115) to be directed to sgRNA/chimeric RNA claims, providing a comparison chart between the claims designated to the Count in the ‘115 and ‘133 Interferences. Accordingly, “the Board’s conclusions in in the CVC v. Broad interference (Int’f No. 106,115) regarding Broad’s ‘guide RNA’ claim recitals apply equally here,” Broad argues.

providing footnotes (set forth below). As Sigma-Aldrich explains:

[T]he Broad claims in the two right-hand columns labeled “Claims Correspond” should remain designated as corresponding to Count 1, and thus should remain involved in this interference. On this motion, Sigma does not contest that the Broad claims in the middle columns labeled “Claims Do Not Correspond” and “FN3” should be de-designated from corresponding to Count 1.

Having provided these arguments, Sigma-Aldrich asks the Board to deny Broad Preliminary Motion No. 3.

2 Of Broad’s 461 involved patent claims, 42 of those claims are directed to insertion of a “template.” Id.

3 Of Broad’s 461 involved patent claims, 8 of those claims are dependent claims directed to cleavage plus integration by HDR. Id.

4 The claims recite “a chimeric RNA” or “a guide sequence fused to the tracr sequence.” Id. ¶ 43.

6 The claims recite “displays a phenotype or carries DNA to display a phenotype of the genetic modification”, analogous to altering gene expression. Id. ¶ 45.

8 Because Sigma does not dispute Broad’s request that the ‘876 patent be removed from this interference (albeit for different reasons), the authorized Sigma Motion 2 to remove the ‘876 application from the interference is rendered moot by Broad Motion 3. See Sigma Notice Re : Sigma Motion 2 (to Remove Application 15/330,876 from the Interference) (Paper 52).

9 Claim 35 also does not correspond to Count 1 because it recites “the vector comprises a U6 promoter operably linked to a nucleotide sequence encoding the chiRNA”, which would not have been obvious in view of the count. Ex. 1518 (Cannon Supp’l Decl.) ¶ 47.