The relationships between the patents and applications in the ‘132 interference are set forth in this chart (filed in CVC’s earlier preliminary motion in Interference No. 106,115): 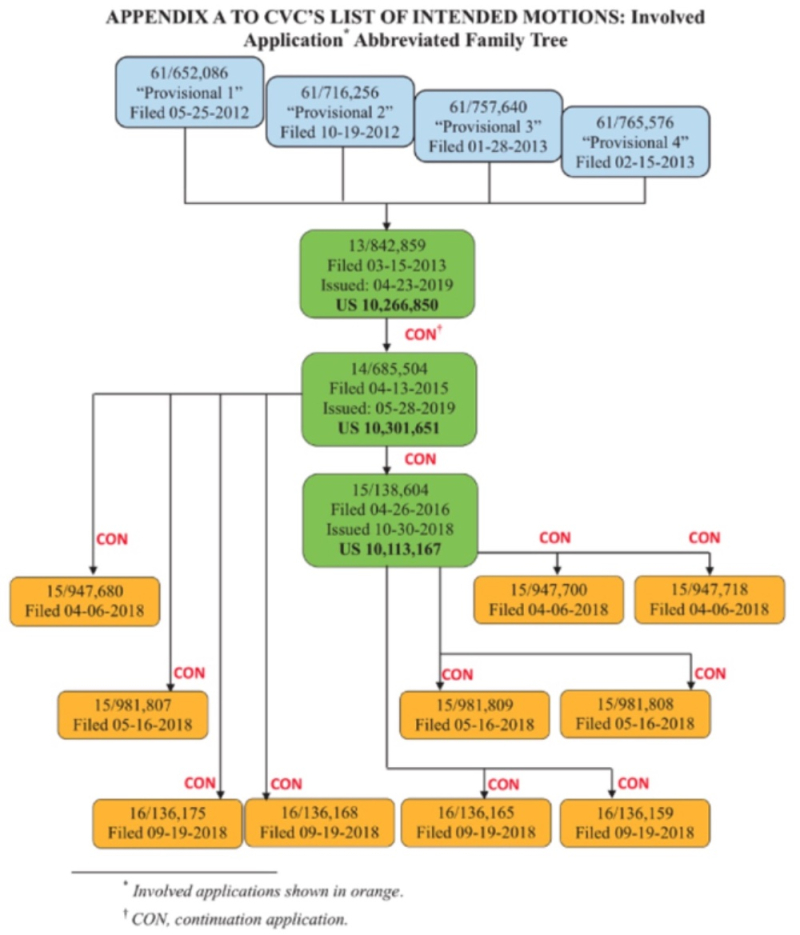 The significance of the Board granting this motion with regard to the P1 or P2 provisional applications would be that CVC would be Senior Party, with all the presumptions benefitting Senior Party status.

CVC has filed similar motions in earlier Interferences (in the ‘115 Interference and in Interference No. 106,127) without (at least complete) success (as to the ‘115 Interference; the Board has not yet ruled on the corresponding motion in the ‘127 Interference) and in this Interference with regard to the Count as declared. Unlike in each of these cases, however, in this Responsive Motion CVC sought priority benefit to the earliest of its priority documents which focuses the argument to what was disclosed therein. Specifically, the brief referenced the disclosure for using sgRNA in a pre-assembled ribonucleoprotein complex with Cas9 microinjected into fish embryos, human cells, and fruit fly cells that produced double-stranded breaks at specific target sequences by followed homology-directed repair using endogenous cellular machinery. Because these functions comprise the elements of CRISPR as recited in Sigma-Aldrich’s Proposed Substitute Count, CVC argued they are entitled to P1’s May 26, 2012 priority date (or in the alternative the filing dates of the P2, P3, or other utility applications set forth in the brief).

The brief set forth arguments falling in line with its arguments for priority in each of the Interferences involving CRISPR where it has been a (always Junior) Party, that its disclosures were sufficient in the absence of an actual reduction to practice to be entitled to priority benefit as a constructive reduction to practice under the legal requirements (ie., describing one embodiment falling within the scope of the Count; Falkner v. Inglis, 448 F.3d 1357, 1362 (Fed. Cir. 2006)) as understood by one of ordinary skill in the art. These disclosures CVC relied upon include the level of skill in the art at the priority date, specifically with regard to ZFN- and TALEN-mediated methods for site-specific DNA cleavage in eukaryotic cells, as models for CRISPR-Cas9 mediated cleavage. In making these arguments, CVC disparages (gently) the Board’s decision in the ‘115 Interference granting their Preliminary Motion No. 1 only in part (ie., to confer priority benefit to their P3 provisional application only). The brief contained a chart showing correspondence between 10 elements of the proposed substitute count and the three emboddiments CVC argued were disclosed in the priority applications corresponding thereto:

The brief then set forth the details of this correspondence for each of these embodiments as disclosed in the P1 specification (following the same template for this argument regarding the P1 disclosure that CVC had used in similar Motions in other Interferences, for both written description and enablement )[i]n light of general knowledge in the art and the POSA’s high degree of skill, P1 conveys possession of at least one embodiment within the scope of PC2 and all the detail needed to practice it.”

[B]Ased on basic procedural considerations for patent interference prospects, not for substantive reasons. Because the Board has repeatedly admonished practitioners that patent interferences are fundamentally priority contests, a challenging motion patentability would typically not be authorized absent a showing that such a motion would challenge every involved claim. See CVC v. Broad, Int’f No. 106,115, Decision on Motions at 7 (PTAB Aug. 26, 2019) (“Authorization for a proposed motion regarding unpatentability under 35 USC § 112 is DENIED because it will not further the inquiry into priority of invention of a count. This ground[] of unpatentability would not address all of CVC’s claims and, therefore, even if decided in favor of Broad, would not be dispositive of the interference.”).

In this case, according to the Opposition, the involved applications in this interference constitute 412 claims, which Sigma-Aldrich termed “a daunting endeavor” for challenging patentability for sheer volume. While “all of CVC’s involved claims likely from written description deficiencies,” Sigma-Aldrich stated, it had concluded that reasons of efficiency counseled that “those issues [were] better left for another day.”

Unique to Sigma-Aldrich’s Opposition argument is a comparison between Figure 4 in CVC’s provisional applications:

with a diagram from a 2010 Urnov reference directed to zinc-finger nuclease (ZFN) cleavage:

The Opposition concluded with a long litany of contemporaneous statements supporting Sigma-Aldrich’s position that CRISPR-mediated HDR was thought to be “unpredictable,” “[not] controllable,” and plagued by eukaryotic cell-specific difficulties that exist even at the present time and, on this basis, required more disclosure than was in any of CVC’s P1, P2, or P3 provisional applications.

CVC’s Reply reiterates it position that P1, P2, and P3 provisionals satisfy the requirements for providing a constructive to practice, because the “level of ordinary skill in the art was high,” based on the evidence that “numerous independent groups successfully and near -simultaneously demonstrated the claimed invention,” and that a “POSA reading P1 would immediately have understood P1 explains how to apply the system in a fish cell (E4), human cell (E5), and fruit-fly cell (E6) using the well-known molecular biology techniques P1 described.” Their disclosure did not require a working example or to “dispel hypothetical [or “fabricated, post-hoc”] posited by Sigma” (addressing them if not overcoming all of them specifically in the Reply). The Reply then repeats the arguments from its Motion regarding what the P1 (and P2 and P3) applications disclose and that this would have been sufficient to satisfy the constructive reduction to practice requirements needed to entitle benefit of priority to Sigma-Aldrich’s proposed Substitute Count. And CVC reiterates its arguments that the Board was wrong in deciding against its similar motion for priority in the ‘115 Interference (see “PTAB Denies Broad Motion No. 2 to Substitute the Interference Count”), and it is not controlling here, and was also incorrect (indeed, it’s decision “has no relevance”) in deciding that interference by granting priority to Senior Party Broad (see “PTAB Holds for Broad in CRISPR Interference: The Reasoning”). Finally, CVC defends the propriety of filing Responsive Motion No. 1, in the face of its own Substantive Motion No. 1 and Sigma-Aldrich’s Motion No. 1, because CVC’s Substantive Motion was directed at priority benefit for Count 1 while its Responsive Motion is directed at Count 2.

CVC thus asks the Board for priority benefit to the P1 application or alternatively “P2/P3.”