The relationships between CVC’s patents and applications in the ‘132 interference are set forth in this chart (filed in CVC’s earlier preliminary motion in Interference No. 106,115): 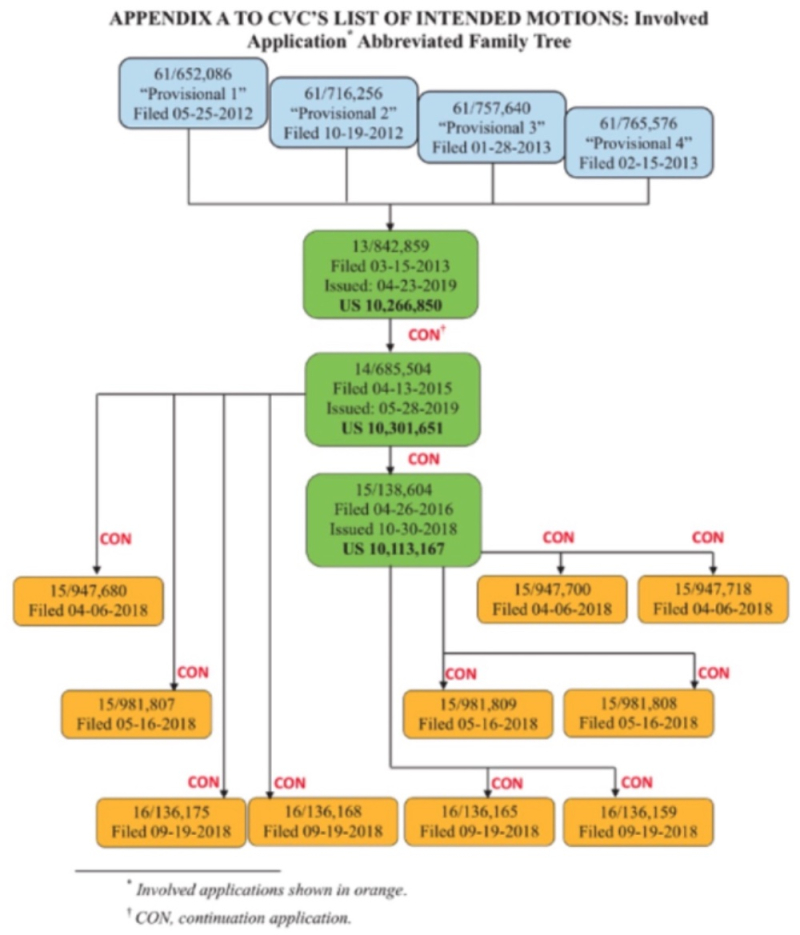 CVC argued it was entitled to priority because it had “invented a eukaryotic cell comprising a single-molecule guide RNA (“sgRNA”) CRISPR-Cas9 system capable of cleaving or editing target DNA, as defined by the count” (an argument that may have lost most of its persuasive force after the PTAB held that inventors from the Broad Institute and colleagues were entitled to priority for this invention; see “PTAB Grants Priority for Eukaryotic CRISPR to Broad in Interference No. 106,115”). CVC further argued that developments (not the one just cited) in the ‘115 Interference provided additional evidence to support its motion (CVC having made a similar argument in the ‘127 Interference having ToolGen as Senor Party; see “The CRISPR Chronicles: Enter ToolGen”).

Most of CVC’s arguments will be familiar to anyone following parallel motions in the ‘115 and ‘127 interferences. These include CVC’s contention that once its breakthrough of using sgRNA-containing CRISPR embodiments had been achieved, adapting CRISPR to the eukaryotic cell environment would have been “pretty straightforward” (quoting Dr. Luciano Marraffini, who purportedly informed the Broad Inventors of the sgRNA embodiment in June, 2012; see “CVC Files Motion in Opposition to Broad Priority Motion”). CVC supported this assertion with contemporaneous consistent statements from Rodolphe Barrangou, Erik Sontheimer, Samuel Sternberg, and Dana Carroll, as well as Jennifer Doudna; by the existence of “existing platforms that had already been successfully used with the two incumbent systems: zinc-finger nucleases (“ZFNs”) and transcription activator-like effector nucleases (“TALENs”); and by the successful practice of CRISPR by several groups (including Sigma-Aldrich)”[j]ust months after CVC presented this work” and the absence in the reports from any of these groups of “any ‘special’ adaptations or conditions needed” to achieve CRISPR gene editing in eukaryotic cells. CVC also argued that the Board’s contrary conclusion in denying CVC’s motion for priority benefit to the P1 and P2 provisional applications in the ‘115 Interference was made “without the benefit of the now well-developed evidentiary record,” specifically, that “[t]he prior decision credited assertions that have been seriously stressed by evidence presented during the priority phase of the ‘115.” That evidence was presented in CVC’s Motion, which will not be recapitulated here;, of course, the Board held that none of This new evidence was sufficiently more persuasive for the Board to arrive at CVC’s conclusion.

Sigma-Aldrich’s Opposition countered CVC’s assertions using the same approach successfully used by Broad in persuading the Board to find priority of invention in their favor in the ‘115 interference (see “PTAB Holds for Broad in CRISPR Interference: The Reasoning”): that the two provisional applications (filed on May 25, 2012 and October 19, 2012) did not disclose an operative embodiment of CRISPR that could be successfully practiced in eukaryotic cells. (Sigma-Aldrich does not challenge CVC’s motion with regard to the P3 provisional application, no doubt because inter alia its status as Senior Party in this interference would not change should the Board do so.) Harkening back to the Board’s decision on a similar CVC motion in the ‘115 interference, Sigma-Aldrich argued that the Board was correct in its prior determination that those applications only disclosed in vitro CRISPR methods in a “cell-free” environment. The cornerstone of Sigma-Aldrich’s motion was that neither the P1 nor P2 provisional applications disclosed any “specific instructions or conditions” required for the practice of CRISPR in eukaryotic cells and that such instructions and/or conditions were necessary in view of the several obstacles required (tracking the same distinctions between CRISPR in eukaryotic cells and under other conditions recited by Broad in the ‘115 interference and Interference No. 105,048; see “PTAB Decides CRISPR Interference in Favor of Broad Institute — Their Reasoning”). According to Sigma-Aldrich, nothing has changed that would have the Board render a decision different from their refusal in the ‘115 interference to accord CVC benefit to P1 and P2 provisional application, and the Board should come to the same conclusion. (Sigma-Aldrich contended that most if not all the evidence CVC asserts in its brief supporting its priority benefit motion in this interference had been asserted in the corresponding brief in the ‘115 motion.”)

CVC’s Reply (filed after the Board’s ruling against it in the ‘115 Interference, which CVC contends is not controlling here), reiterates its position that its P1 and 2 priority documents “describe[] and enable[] a eukaryotic cell comprising an sgRNA CRISPR-Cas9 system that is capable of modifying target DNA “because”[t]he level of ordinary skill in the art was high, as numerous independent groups successfully and near simultaneously demonstrated the claimed system in eukaryotes” and “[a] POSA reading P1 would have immediately understood that P1 explains how to apply the system in a fish cell (E1), human cell (E2), and fruit-fly cell (E3) using the well-known molecular biology techniques P1 described.” , CVC contends that a constructive reduction to practice does not require a working example or that CVC “dispel the hypothetical concerns that CVC’s opponents have alleged.” To hold CVC to this higher standard was wrong as a matter of law by the Board and for Sigma -Aldrich to oppose CVC’s Motion No. 1 on this basis, a strong statement encapsulating the burden CVC will likely need to sustain not only to prevail in this motion (which is unlikely to be given the Board’s other decisions against CVC in other interferences) but in trying to overcome the Board’s priority determination in the ‘115 Interference.

CVC then recites the disclosure in the P1 and P2 provisional applications in detail that would have enabled the skilled worker to achieve CRISPR cleavage in eukaryotic cells (none of which will be new to the Board and none of which has been persuasive before), asserting that “no element of Count 1 is missing from P1’s description.” The brief contains several citations such as “‘acknowledgment of the complexities of the science does not negate the disclosure,’ where the disclosure itself does not ‘fail[] to teach any essential step, ‘but rather describes how to obtain the subject matter by ‘following the general procedure disclosed,'” citing Frazer v. Schlegel, 498 F.3d 1283, 1288-89 (Fed. Cir. 2007), supporting the principle that CVC’s constructive reduction to practice in these provisional applications satisfied the factual predicate for receiving priority benefit. CVC relies on the “new” evidence in its brief, “from six different declarants,” and boldly states that “[t]he Board may not simply recycle its ‘115 Decision on Motions here.” These include that “[i]n vitro studies have predictive value” and “[a] POSA reading P1 would immediately envisage E1, E2, and E3.” Further, CVC argues that a reasonable expectation of success from such disclosure is not required but “even if it were, the contemporaneous evidence overwhelmingly shows that those in the field expected sgRNA CRISPR -Cas9 to function in a eukaryotic environment.” CVC also addresses Sigma-Aldrich’s recitation of the various hypothetical concerns, “”challenges and uncertainties” that have so far proven to be persuasive to the Board in other interferences.

In further support for its position, CVC cites interference practice principles, for example that Sigma-Aldrich did not contest any of the Material Facts in CVC’s Motion No. 1, citing Zhang v. Amsel, asserting for this reason alone the Board can grant its motion. Interference 105,550, Paper 26 at *10 (BPAI March 24, 2008).

In CVC’s boldest argument (which may presage the CVC arguments makes in its appeal of the Board’s decision against it in the ‘115 Interference), the Reply argues that the Board’s Decision on Motions in the prior interference is not controlling here and that it was wrong . CVC supports the former argument by reciting “evidence that [purportedly] was either not addressed in the ‘115 Interference or new evidence uncovered during the priority phase.” For its latter argument, CVC limits its contentions here to a difference in the question at issue in this Motion and the Board’s decision (priority based on conception and reduction to practice versus the adequacy of the written description of the P1 and P2 applications); the Board’s reliance on documents not available to a POSA on P1’s filing date; the Board’s refusal to consider the “viewpoint” of a POSA; and that the Board’s decision in the ‘115 interference is not final and will be appealed (CVC asserting optimism that “the Federal Circuit can be expected to conclude the Decision reached an incorrect legal conclusion on conception.”

CVC thus asserts that the Board should accord them benefit to the P1 or P2 application filing date.